Paradoxically, it’s the Scottish nationalists who are interfering in English affairs. Perhaps as a sign of insecurity about what an independent Scotland would suffer, there’s a pretty clear SNP agenda to break up England itself 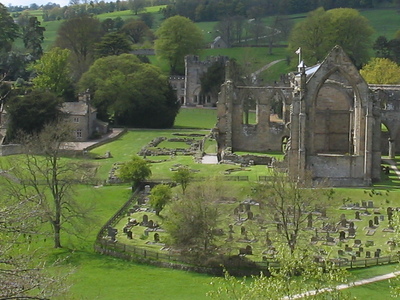 Bolton Abbey in Yorkshire: a proud county; English through and through

Over the last few days, I have digested the words and responses from Alex Salmond’s SNP (Scottish National Party) regarding a new dawn for Scotland. As I did so I could not help but notice that they have, in essence, been calling throughout 2013 for the break-up of England into smaller bite size chunks (also known as regions).
At the same time they have been reluctant to endorse fellow forward-looking nationalists in England, who have been calling for an English Parliament as an essential element of fairness and equality across the UK.
To ensure justice is given to the SNP (and before the SNP’s ‘media hounds’ condemn any suggestion that their comments appear tainted with imperialism) we must first confirm what meaning of ‘Imperialism’ — or in modern language, ‘old fashioned nationalism’ — is being suggested.
The precise meaning is that one nation seeks to dominate another, either politically, economically or socially. Many in Scotland might think that an Englishman suggesting the SNP are ‘old fashioned nationalists’ is a bit rich, but the term is meant loosely as in ‘soft power imperialism’.
So we need to weigh up and balance the facts before dismissing this possibility — it could well be the ‘Achilles heel’ of the SNP.
Unionists in particular should pay attention, as rebalancing the Union would scupper the SNP’s referendum (which it is highly unlikely to win anyway). Firstly, let us ponder some of the basic principles that bind modern, forward-thinking nationalists all around the world.
If there is one thing we have learned from history it is that nationalism must be defined by its own borders. If they are to be successful and progressive, nationalists have to respect that the concept of a ‘nation state’ is almost an emotion, a human condition which is felt by many all around the world, and owned by none.
If we are to seek respect and recognition for our own nation, then surely we must respect and recognise the nationhood of others.
If you accept that principle then the expectation would be that a fellow civic minded, democracy believing nationalist from another nation (let’s say Scotland), when asked about the self-determination of another country (for arguments sake, we’ll randomly choose England), would reply that the citizens of that country have every right to govern themselves in whatever way they want.
It would be fair to say that they would believe in a system that respected the national borders and internal politics of other countries.
Yet instead of wanting to see England experience self-determination, Alex Salmond’s SNP appear to be more intent on seeing England broken up into small regional pieces. The English in the south of England keep hearing from the SNP of how the North of England has more in common with Scotland than it has with them, even though Scotland is a different country.
Just imagine if Germany said the same to France? That could easily been seen as a classic example of old fashioned nationalism at work. Currently, it would appear that the governing political party in Scotland does not respect English national borders, encouraging as they are the concept that England is not one country.
Alex Salmond, the first Minister of Scotland and leader of the SNP, needs to remember that they have no democratic mandate to engage in internal English affairs. Basically, how England is governed is none of their business.
As nationalists, Salmond and the SNP should understand the burning desire to be self-governing, free from outside interference. They would not appreciate the English telling Scots that the Orkneys have more in common with Norway. They would be outraged, and rightly so.
So, the only logical conclusion that an Englishman like myself can make is that Alex Salmond is using divide and rule tactics, seeking to dominate England through the suggestion that she should be broken up for the sake of UK governance.
This is at best a misleading message — he clearly doesn’t want UK governance; he wants Scottish independence and rejects the UK. The two approaches simply do not lock together. One is in opposition to the other.
England is starting to wake up and see that the SNP can only be attempting to create an economic situation where Edinburgh (the Scottish capital) can challenge London (the English Capital, not just the British Capital) for financial gain. Why else would the SNP encourage the regionalisation of England?
The problem they face is that Scotland can never truly be independent of England. The geographical size and population of England means it naturally takes the dominant trade position. Because of this, Scotland will always need to trade with and through England, dependant on her as a gateway to the rest of the world.
However, if Alex Salmond is able to stir up enough dissent amongst the northern border towns of England and help create little, semi-autonomous regions in the north of England, he can then start the process of making Edinburgh the most powerful city in Britain and Scotland an economic ‘King pin’.
This in turn could leave London and the south of England isolated, leading to turbulent and unsteady times in the north. This could be disastrous (economically) for Scotland.
If Alex Salmond only wants independence for Scotland, then most people in England would wish the SNP all the best — but if at heart it is ‘old fashioned nationalism‘ and no more than a desire to dominate England, then they are playing a very silly and dangerous game. They should be careful, as close national bonds can quickly become unstable.
Kindly advice for the SNP in 2014 is urgently to stop their chatter about English governance. They should be forward looking nationalists, focusing on the governance of Scotland — not England
As a nationalist, all Alex Salmond should say when asked about English governance is ‘I hope England can accomplish self-governance’ which means the English need their own parliament and government.
Eddie Bone is Campaign Director at the Campaign for an English Parliament
Donate to the Campaign for an English Parliament