The English question: What is the nation’s identity? 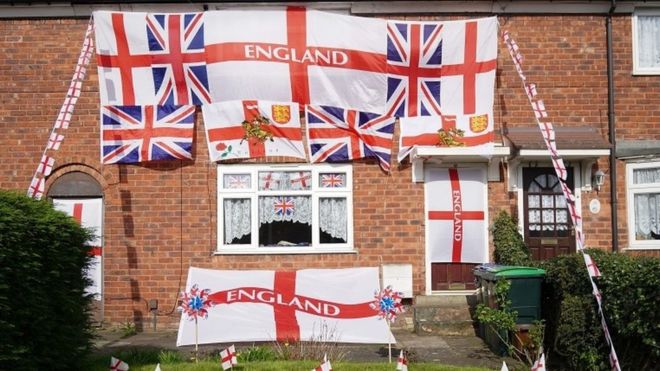 I spent St George’s Day this year in Nottingham, among a large crowd bedecked in the red and white of their national saint. “Why can’t we celebrate St George?” they asked me. “The Irish, Scots and Welsh have their national days. Why can’t we English have ours?”

The irony was obvious. No-one had suggested they couldn’t. Indeed, a huge St George’s flag was draped across the town hall and police were good-naturedly marshalling hundreds of patriots to the main square. The lord mayor of Nottingham, in full regalia, had given the official send-off.

I have encountered such defensiveness many times. There is a commonly held belief that, for all its size and influence within the union, England is treated like an embarrassing uncle at a wedding.

It is fair to say that the politics of devolution over the past 20 years have focused attention on the identity politics of other parts of the United Kingdom. The appropriation of the St George’s flag by elements of the far right has also intensified squeamishness for English nationalism.
But the relationship between the people of England and the country in which they dwell is fundamental to understanding the volatility of contemporary politics.

 How proud is your area of being English?

Which part of the UK presents its greatest existential challenge? Scotland as it tests the waters of independence? Northern Ireland with its borders buffeted by the winds of Brexit? The nationalist flames of the Welsh dragon, perhaps?
The answer, I believe, is to be found buried in the soil of England. A quarter of the population believe English interests should be prioritised, even if that were to threaten the United Kingdom. 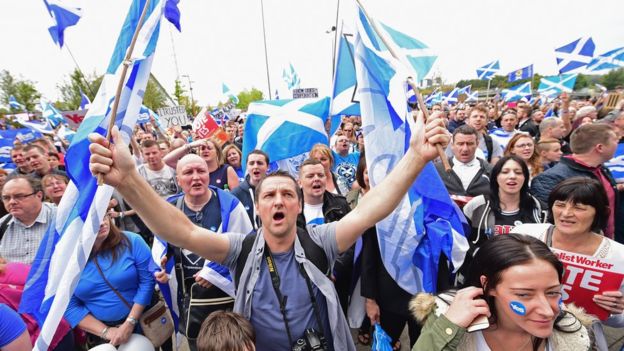 Scottish nationalism emerged as a powerful force during the country’s 2014 independence referendum campaign
England has long been the conundrum at the heart of the union, which is why, two years ago, I proposed the BBC should conduct a comprehensive survey of English identity. I suggested that until we understood what England means to its people, predicting its future would be very difficult.

The day I was due to discuss my plan with senior editors was 20 February 2016. The meeting never took place, of course. That morning David Cameron announced the UK would hold a referendum on our membership of the European Union.

Almost two years later and ‘The English Question’ project did finally get the go-ahead. Working with the pollsters YouGov and academics, we devised a questionnaire on identity and belonging, to be completed by more than 20,000 people in England.

Although the focus of the research was England, we also commissioned surveys in Scotland, Wales and in Northern Ireland to compare and contrast attitudes across the kingdom.
Identities intertwined

All of us have multiple identities, of course. We may have a strong sense of belonging to one nation or more than one. We may feel powerful allegiance to a county or a city. People in England may feel English, British, something else or a mixture.

Our survey tested the relative strengths of people’s relationship with different geographies. Its findings suggest 80% of the residents of England identify strongly as English. But it also finds a similar proportion, 82%, strongly identify as British.

Only small proportions said they were one but not the other. British and English identities are intertwined; they are strands of the same national thread.

Some have suggested that the British identity is being strangled by rising English nationalism, but that idea is not borne out by the survey.

Indeed, the British identity is felt strongly by all generations – exactly the same proportion (83%) of both 18-24 year-olds and 50-64-year-olds report a powerful association with Britain.
It’s a strong national characteristic across almost every demographic: politics, education, class and geography.

The English identity, however, is felt more variably.

Pride in identifying as English is weaker among the young (45%) and stronger among the old (72%). This is the reverse of the experience in Wales where the strength of the Welsh identity reduces with age. In Scotland, over 80% of all age-groups say they feel strongly Scottish. 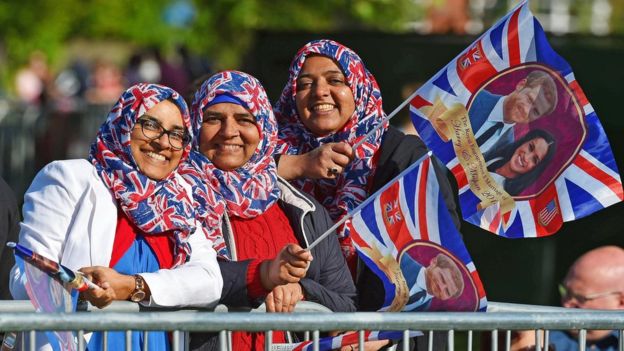 The extent of the nation’s pride in Britishness was obvious during the recent royal wedding
In England, Conservative voters are much more likely to say they are proud to be English (77%) than those who support Labour (45%) and the Liberal Democrats (42%). Among leave supporters in the Brexit referendum English pride is 75%, among those who voted remain it is 44%.
The sharpest divide in English identity is associated with ethnicity. While 61% of people who describe themselves as white are proud to declare their English identity, among ethnic minorities it is just 32%. British identity is strongly felt by three-quarters of the BME population.
The English identity emerges as more exclusive while the British identity is seen as more inclusive. Among those who call themselves English rather than British, only a third say the country’s diversity is an important part of their identity. Among those who describe themselves as more British than English, the figure is two-thirds.
Better in the past?

The greatest contributors to English identity, the survey suggests, are the natural landscape and the nation’s history. The strongest image of England is a pre-industrial bucolic nation populated by well-mannered and virtuous citizens. People generally see England as conservative and traditional rather than liberal and outward-looking.

There is more than a hint of nostalgia about people’s sense of Englishness. Almost three times as many of its residents think England was ‘better in the past’ than believe its best years lie in the future.

In Scotland, Wales and Northern Ireland, by contrast, significantly more people think their country’s best years lie ahead rather than behind them.

So while the rest of the UK feels pretty optimistic about their prospects, England seems particularly glum. The more English people feel, the more retrospective they are, and English wistfulness is particularly strong among those who voted to leave in the Brexit referendum.

England’s Christian tradition is important for almost half of Leave voters, but only 29% of remain voters. Leave voters are significantly more likely to talk of Englishness in terms of history, fair play, tolerance, plain-speaking and friendliness than those who wanted to remain.

But not everyone is comfortable calling themselves English. Eight out of 10 people regard it is a strong part of their identity but fewer than six in ten say it is a source of pride.

For some it is the opposite: among graduates, the young, Labour and Lib Dem voters, remain voters, Londoners, Mancunians and Liverpudlians, roughly one person in 10 says they would be embarrassed to describe themselves as English.

Nevertheless, the interlaced English and British identities remain an important part of how the people of England see themselves. For many it seems the two are almost interchangeable, reflecting an enduring loyalty and love for the nation, its story and its values.

Being English is more than a factual statement about place of birth or citizenship. It is an attitude and a state of mind.

About the data
The opinion poll was conducted by YouGov who questioned 20,081 people. The poll has a margin of error of plus or minus 1%.
The council level estimates shown in the search box above are based on the poll and a statistical procedure called multilevel regression and post-stratification or MRP. The technique produces estimates for small areas based on a limited amount of data. It uses the people from each local authority to predict that area’s results, but to ensure that this small amount of data is representative of the wider population the estimates are balanced out using comparable data from the poll from the rest of the country and the census on the demographic make-up of the local authority in question. As with all models the figures are subject to uncertainty. The analysis was run by Dr Kevin Cunningham working with Dr Ian Warren of @ElectionData. More details on MRP are available from YouGov.

Be the first to comment on "The English question: What is the nation’s identity?"